Redman, Hobbs, Andretti, Posey, Follmer, Sell, Lunger, Donohue driving Lolas, McLarens, McKees, Shadows, Eagles, Lotus, Surtees were some of the F5000 stars in the SCCA and later the SCCA/USAC F 5000 series of 1968 through 1976.  They raced on the great road racing circuits of North America in front of enthusiastic crowds

This was a world class pro series with excitement, drama, great racing, great cars, top circuits and legendary drivers.  The whole story is well told in this don’t miss large format, hard cover book of 224 pages and over 100 images from Racemaker Press

The book is available from auto book retailers or from the publisher, www.racemaker.com, Phone 617-723-6533 (MA)

This vintage racing weekend attracts RMVR’s largest entry to support The Morgan Adams Foundation charity.  The weekend starts with Test and Tune on Friday and continues with liberal practice and race sessions Saturday and Sunday.  RMVR has many programs for attendees to contribute to this good cause.

Corvette is the honored marque at this vintage racing weekend and a Corvette vs Viper race will be featured.  Corvette is also the marque for all of the following week’s special motorsports events leading to the Pittsburgh Vintage Grand Prix July 23-25 in Schenley Park.

This annual vintage and historic event includes Thursday, Friday practice followed by Saturday and Sunday races. There is a Friday evening race car concours in the town of Elkhart Lake and a Saturday evening sports car concours in town. This is a full spectator event this year. I

The Weekend of July 9-11 Has Vintage Racing Action in New Hampshire, California, New York and Oregon

VSCCA White Mountain Grand Prix is at Tamworth, NH Friday and Saturday.  The University of VARA racing school is also Friday and Saturday at Buttonwillow, CA.  HSR and Masters Finger Lakes Invitational is at Watkins Glen Friday-Sunday.  The Portland Rose Cup has two vintage race grids and several contemporary races during the Friday through Sunday Festival at Portland International Raceway, OR.

This is SOVREN’s annual big northwest vintage racing event attracting the best cars and largest spectator crowd to a top road racing circuit.  This year the event features the history of the circuit and the 60 year history of Jaguar XKE

The history of the circuit includes United States Road Racing Championship and Trans Am races.  In 1963, the first year of the USRRC, a 26 car field of international cars and drivers saw Pedro Rodrigues take the Driver’s Championship win in a Genie Mk8.  The Manufacturer’s Championship race winner was a Shelby Cobra driven by Dave McDonald.  Pacific Raceways continued to host the USRRC every year through 1968.  The drivers were the who’s who of American racing: Jim Hall, Jerry Grant, Peter Revson, Mark Donohue, Bob Holbert, Ken Miles and Skip Scott.  Many of the USRRC cars from those days are expected to be racing including: Cobra, Lotus, Corvette, Porsche, Jaguar, Lola, Triumph, Lotus Cortina, Alfa Romeo, Sunbeam and more.

Featured will be a full program of sprint races for every SOVREN class and type.  There will be Sports Racing Cars, Production Sports Cars, Formula Cars, Sports Sedans and Trans Am cars.  A special infield flea market of every type of automobilia and car parts will be an added feature this year.

This two mile road racing circuit in Illinois will host a three day vintage racing weekend with liberal track time making it a racer favorite.  In addition to group races, there are several features: Closed Wheel Enduro on Saturday – Open Wheel Enduro on Sunday, Spridget Series Race, V8 Short Track Challenge Race.  There is usually a good turnout of Formula Vees including visiting racers from CVAR.  The VSCDA PreWar Racing group rates Blackhawk as a favorite with a good entry.

Many Lotus racing cars were entered in the June 24th 1961 Players 200 at Morsport.  This was the first major race at this legendary circuit now called Canadian Tire Motorsport Park.

There will be six traditional VARAC group races for cars built before 1972.  In addition, there are groups for classic cars built up to 1999, plus a group of Formula Classic for open wheel and Monoposto cars.

This is a non spectator event and area COVID protocols will be in effect.

Posted Jun-10-21 at 12:27 AM By dan davis
June 11-13 VSCCA and VRG team up for the Vintage Motorsports Festival at Thompson Raceway CT.  Formula cars are featured. 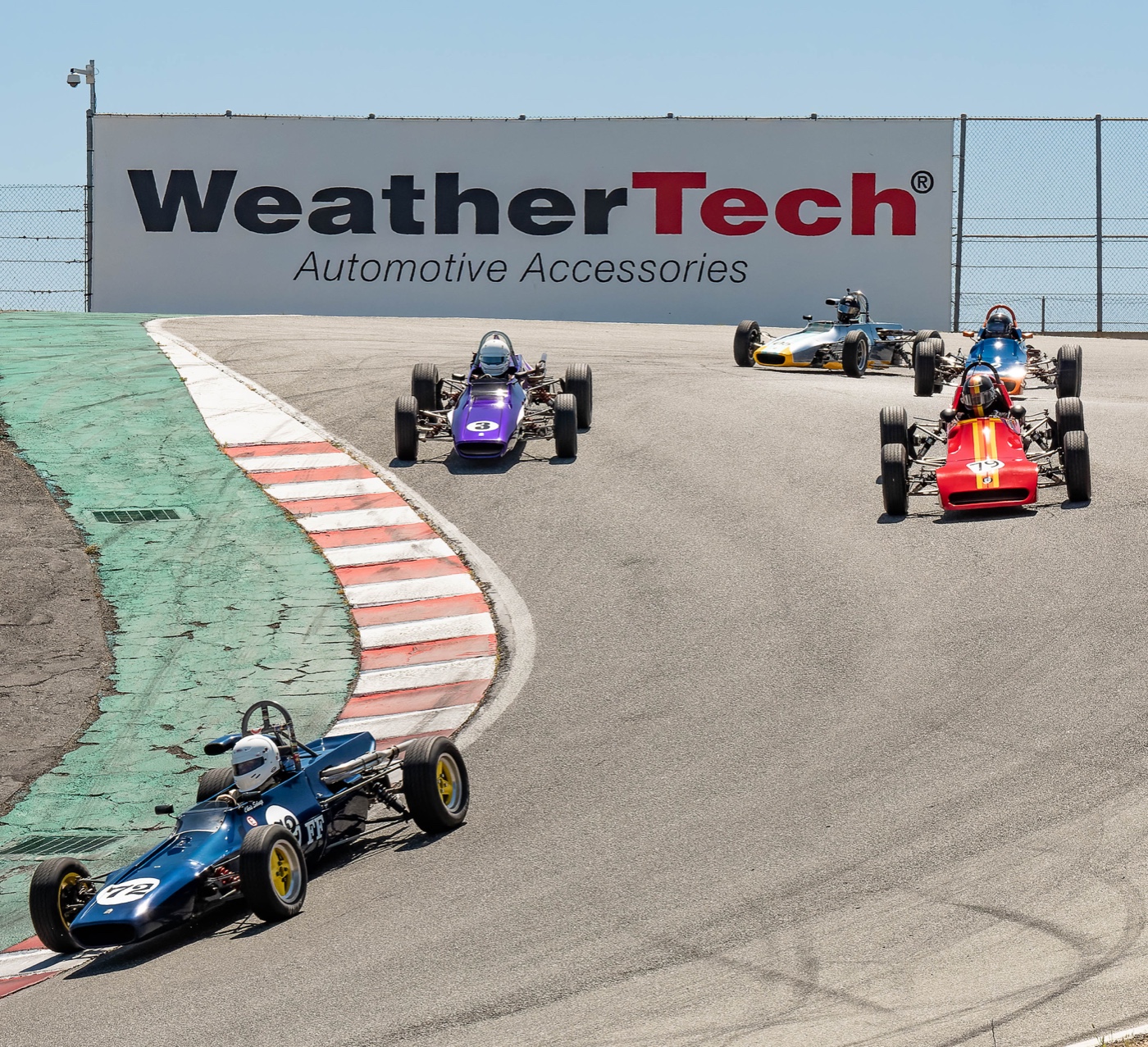 CSRG's highly anticipated return to Laguna Seca proved successful on many fronts with participants treated to good weather and plenty of racing. The paddock was full of great cars, featuring a nice mix of CSRG stalwarts and racers who trekked to the event. The only thing missing was an audience in the grandstand and, hopefully, with California scheduled to reset gathering restrictions later this month perhaps their next event will have fans present to take in the sights and sounds.

Look for a report on the event in the July issue of Victory Lane Magazine and driver interview videos soon on victorylane.com

SCCA sports car racing is going bigtime!  It was 1962 and the former all amateur Sports Car Club of America announced a new pro series for 1963: The United States Road Racing Championship.  There was a Sports Racing Drivers Championship for two classes: over and under 2 liter cars plus a Manufacturers Championship for FIA GT cars.  Races were scheduled in 1963 at Daytona, Pensacola, Laguna Seca, Watkins Glen, Pacific Raceways, Continental Divide, Road America and Mid Ohio. The new series absorbed the pro racers from the short lived USAC pro road racing series.  The USRRC ran from 1963 through 1968.

The USRRC Tribute Series feature with CSRG is Saturday afternoon June 5 with a record field expected.  The USRRC awards party is later about 4:30 pm.  The feature will be filled with some of those great legendary sports racers of the original series.

All CSRG classes are racing both Saturday and Sunday.  There are also Crossflow Cup series races during the weekend.

The Friends of Steve McQueen Car and Motorcycle Show is been moved from June 5-6 to October 2 and 3.  It is held at The Boys Republic in Chino, California.  The theme is Le Mans.

The Eyes on Design Concours in Detroit is moved from June 20th to September 19th and will salute Significant Designs of Bygone Brands.  It will be at the Edsel & Eleanor Ford House.

Vintage oval races are held at many short tracks in June.  In the midwest, Colorado Vintage Oval Racers and the Midwest Oldtimers Vintage Race Car Club have a busy June with three exhibition events each.

The event is at the International Hall of Fame located at the Talladega Speedway.  The event begins with a 10 am meet & greet followed by lunch and the inductions.

All members of Alabama Auto Racing Pioneers, race fans and racing participants are invited.  Tickets are $40 purchased online at www.aarpinc.org.

The Shadow DN4, driven by Jackie Oliver to the 1974 Canadian American Challenge Cup Series Drivers Championship, took the top sports or competition car honors at the 2021 Amelia Island Concours d’Elegance.  The car is owned by Jim Bartel who also entered it in numerous Historic Can-Am races.

The Best of Show Concours d’Elegance winner was the 1926 Hispano-Suiza H6B Cabriolet with Cabriolet style coachwork by Henri Capron.  It was entered by Jill and Charles Mitchell.

Special honoree for 2021 was racer, writer, broadcaster Lyn St James who was feted at the gala Saturday night banquet and with a display of cars she raced on the concours field.

It is a very impressive book by Stuart Codling and great photographers.  The sub title is: “Every Race Car Since 1950” that includes all cars through the SF1000 of 2020.  Dramatic photos, informative text and brief specs on every Formula 1 car over 70 years plus a 19 page Appendix of each years racing results in a 226 gloss page, 12 inch wide, 10 inch high book priced at $60.  Purchase at www.quartoknows.com or phone 1-800-328-0590, email [email protected]

This Alabama road racing circuit is a favorite for all vintage racers.  Its 2.4 miles winds through a scenic layout of 17 turns of every variety.  The special formula features highlight a full schedule of the traditional HSR special themed races, enduros, and sprint class races over four days.

There are very special class features for the Sunday concours on the Golf Club of Amelia Island Course: they include the Ferrari 275 GTB, Porsche 935, Supercars, Chevy Thunder, Hispano-Suiza plus Shadow F1 and Can-Am cars.  Also featured are Muscle Cars of 1970.  Over 250 great classics, sports cars, motorcycles and race cars will cover the field on Sunday.

The festivities center is the Ritz Carlton, Amelia Island and includes the surrounding areas.  Honoree for 2021 is Lyn St. James whose story will be saluted at the Saturday evening gala banquet.  The many activities include Cars and Coffee, rally-tour, new car shows, auction, wine dinner, plus a Chevy Thunder seminar and a Porsche 925 seminar.

“Tow once race twice!  Race at PIRC on the first weekend and we will store your rig there for free so you can come back the following weekend and race through Schenley Park” said an event spokesperson.

The Historics at Pitt Race is a three day event on the 2.8 mile, 19 turn circuit.  This is a cooperative event with VRG.

Schenley Park Races are held on park roads for a true back-in-the-day racing experience.  Entry is limited by car and driver acceptance criteria.  There is a special vintage Indy Car exhibit and laps.

The week between races is full of auto themed events celebrating Corvette as the marque.

Posted May-14-21 at 1:16 AM By Dan Davis
The Trans Am series grew from early beginnings in 1966 to a hotly contested series by factory teams over the next few years.  Ford was a winning marque with top drivers.  The celebration will include races for 1968-1971 vintage Trans Am cars.  Also expected will be special displays and awards presentation.
Info: www.weathertechracewaylagunaseca.com
Posted in: News | Post a Comments

Posted May-14-21 at 1:14 AM By Dan Davis
The street circuit will host the Pace Grand Prix during Friday and Saturday of the Festival.  The entire event includes a road rally, auction, car shows and a Concours d’Elegance.
Into: www.chatanoogamotorcar.com
Posted in: News | Post a Comments

Posted May-06-21 at 11:14 PM By Dan Davis
How good is an event at Thunderhill?
* Mechanical Picnic at midday on both days.
* A ton of track time - at least four sessions, maybe more, depending upon the number of entries.
* A superb track with good runoff areas and an assortment of flowing turns that are fast and fun.
* Race with those who respect your car as much as they respect theirs - no bumper cars.
* Race with friends in a great atmosphere.
* See groups that you don’t normally see - the West Coast Trans Am Group, Sports 2000 and Spec Miata are all
welcome here!
Info: CSRG - www.CSRGracing.org
Posted in: News | Post a Comments

Posted May-06-21 at 11:13 PM By Dan Davis
A spectacular Sunday oval event on the high banks of Winchester is a unique opportunity for MOVR vintage oval cars to enjoy two on-track vintage exhibition laps during this important spectator attracting event.  MOVR sessions are at 12 pm and 1:30 pm, load in is at 9 am Sunday.  There is a private MOVR warmup session May 8 at noon for MOVR pre-registered cars.  Sign up begins at 10:30 am Saturday.

The following MOVR event is May 26-27 for the USAC Tony Hulman classic at the Terre Haute Action Track.